Why Is Everyone Talking About Charisma?

Most of us know someone who has charisma, or have a few friends we’d call charismatic. From the moment they walk into the room, people are attracted to them. They carry themselves with confidence and have a positive demeanor.

Oh, and let’s not forget how easy going, friendly, and self-assured they are. Add to the fact that they can usually tell a great story, and you’ve got the life of the party making everyone around them happy (except for the jealous folks. Never be a jealous folk).

Have you ever wanted to be that person? Well, you’re not alone. To put it plain and simple, all of us have a little bit of a desire to be charismatic. We all wished to be liked and accepted. It’s human nature, and there’s nothing wrong with it.

There’s even a study conducted on charisma by psychologists, Roy Baumeister and Mark Leary, arguing that a fundamental need for humans is to form and maintain positive, long-lasting, and significant interpersonal relationships. It’s all normal.

Baumeister and Leary also believe that the lack of belongingness can cause various undesirable effects, including a decrease in the levels of health, happiness, and adjustment.

It’s very possible that these are the main reasons why there is so much interest in charisma, and why people want to achieve this level of likability.

So, can you learn to be charismatic? The short answer is, Yes. But let us define it first.

Charisma is the ability to relate, attract, and influence people. It’s to be well liked and accepted by others as someone who is interesting and a pleasant individual to be around.

What do you think? Do you think you can achieve charisma?

Is that a yes? Then great!

The best way to achieve charisma is through social interactions. The great part about it is:

Charisma is not a skill you have to be born with! It is a learnable skill.

But someone who wants to learn charisma must practice the right behaviors. Olivia Fox Cobane, author of “The Charisma Myth.” Says, “Charisma is simply the result of learned behaviors.”

According to a Harvard study, eight of the past 10 U.S. presidents who deployed verbal Charismatic Leadership Traits often won.

The study also states that each president measured “good” presentation skills, such as speech structure, clear pronunciation, use of easy-to-understand language, tempo of speech, and speaker comfort. It was found that charisma played a much bigger role in determining who was perceived to be more leader like, competent, and trustworthy.

Of course, there are hundreds of ways one can become more charismatic. We’ve come up with a few quick and easy tips that are so simple, anyone can practice them at any time or day of the week. Let’s begin!

Be Sincere – Being genuine goes a long way. It helps the other person feel more comfortable and relatable to you. Have you ever noticed someone pretending to be interested in someone else? It usually doesn’t work. Not to mention how awkward it can be. Always be sure to find a connection and be curious about the other person.

Build and Gain Trust –This means to be honest, value others, and to adhere to those values. The second piece of trust is confidence.

The figure below describes the aspects of trust by Michael Paschenn and Erich Dihsmaier, who wrote The Psychology of Human Leadership, How to develop Charisma and Authority. The source of charisma = Trust. One must then create Integrity and Confidence. 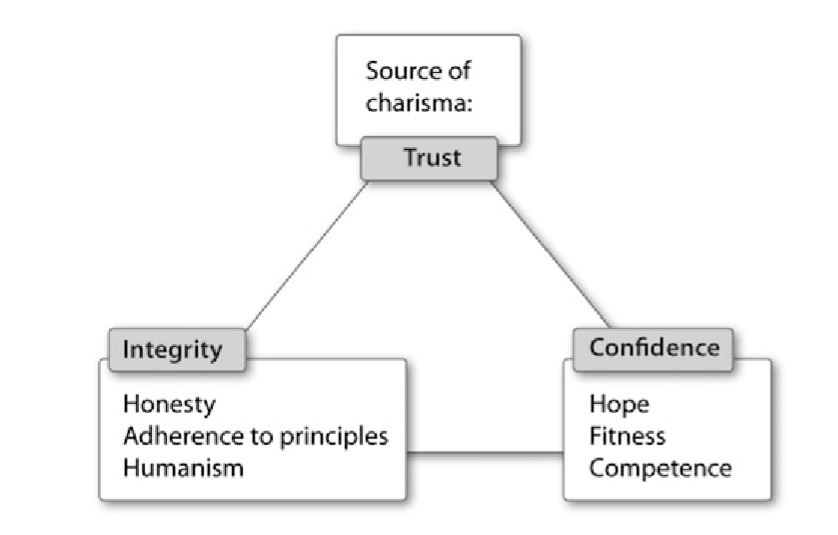 Use Positive Body Language – Uncross your arms, use consistent eye contact, lean into the person you’re talking to, and use an optimistic tone. Be aware of your gestures, expressions, and tone of voice. Have you ever talked with someone who has a monotone voice? Not fun.

Improve Your Story Telling Skills – Have you ever watched or listened to Dave Chappelle? He is a great story teller who makes you feel like you’re in the exact moment of the story. I recommend watching his famous stand up, “Killing them softly” on YouTube.

Have Fun – Don’t take yourself too seriously and enjoy the experience. Try not to worry about making mistakes, and if you do, most likely no one will notice or even care.

In our opinion, if you add these recommendations to your everyday conversations, your likeability will increase, and you’ll be a much more interesting person to converse with!

More research and thoughts on Charisma.

A team of researchers at the University of Toronto, led by Konstantin O. Tskhay, have taken aim at the idea that the average person can’t quantify charisma.

According to their paper, your responses to six prompts can reveal just how charismatic you are. The prompts are below; rate yourself on a scale of 1 to 5 on each behavior.

I am someone who …

Has a presence in a room

Has the ability to influence people

Knows how to lead a group

Can get along with anyone

Divide your total score by six to get your average charisma score. If your score is higher than 3.7, the researchers say you’re more charismatic than the average person.

These prompts were developed through multiple studies that the researchers conducted, with a total of nearly 1,000 participants. The researchers asked participants to rate themselves on a series of qualities that described charismatic people and determined that charisma comes down to two factors:

Influence — i.e. leadership ability and strength of presence — and Affability — or being pleasant and approachable.

Whatever you do, don’t stress out if your score is on the lower end of this measurement.

Psychologist, Dr. Sasha Hernandez says, “Charisma is a great tool to have in conversations and can be developed and worked on. But people shouldn’t feel left out if they don’t relate as someone with charisma.”

Always keep in mind charisma is a learnable skill that you can improve. The best way to accomplish this is to practice certain behaviors such as learning how to read people’s emotions and using specific language in your conversations.

University of Connecticut psychology professor David A. Kenny, PhD, says, “Our actions can speak louder than our words. Evidently, personality is somehow reflected in our appearance, our nonverbal behavior and how we express ourselves, he says. Physical appearance plays a role, sending signals to other people, which affects their way of behaving.”

Bernieri has found in previous research that people subconsciously switch their postures to match that of someone they are talking to. He has also discovered that high-rapport interactions have high synchrony and expressivity.

“But that’s not enough,” Bernieri says. “It’s all about timing, repetition and rhythmic cadence, raising amplitude at key points. This is a craft, and you have to play the crowd like improvisational jazz. The charismatic individual knows the gestures but also has the innate ability to play any given audience.”

A lot of research on charisma suggests charismatic people have strong emotional and social intelligence. They’re simply better at empathizing and connecting with people.

It’s like running, we can all run and improve our mile time with practice, but some people are just faster. This doesn’t mean you should stop running or practicing. This is comparable to conversations and charisma. Don’t stop talking to people because you’re not like Ellen DeGeneres. Keep practicing, and most importantly, have as much fun as possible.

In our opinion, a lot of charisma research is summed up in this one point: Some people are better at being charismatic than others, but you can improve if you learn the correct behaviors.

Below is a spectrum of charisma. See where you’re at. 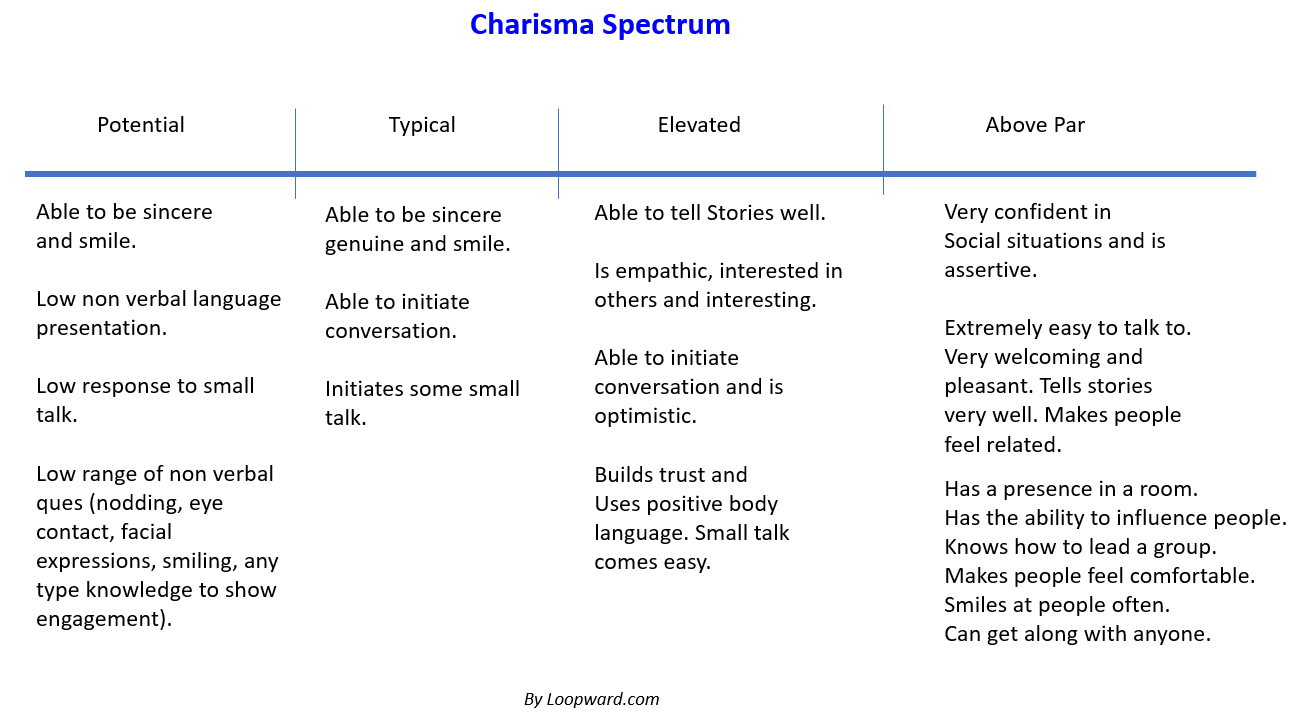 How Good Are Your Social Skills? Take A Quiz.